Is Wearable Tech the next step for Apple ?

With many smart watches now hitting the high street and Google Glass now officially on the market, it is a sign of the times. Wearable technology is the next big growth market in technology and all the major players have something to offer. Apple is one of the companies that should take this timely opportunity to make their mark as a category leader before it’s too late. If rumours are to be believed wearable technology is something that Apple have been working on in great secrecy.

Having read about some of the predictions of upcoming product developments by Apple, the indications are they have developed a wrist band that is much more than just a connected watch. Upstaging the watch & mobile pairing currently taken to market by Samsung, under their consumer wearables product category.

The basis of the technology of the chips and processors for Apple to create a wearable device to compete with Samsung are already on a device currently worn on the wrist of Apple CEO Tim Cook. Yes, it is predicted that the Nike+ Fuelband

is the precursor to a wrist device from Apple with a wrap around screen with a full width continuous display in a connected device.

With recent developments in flexible screen technology it’s not a case of if but when?. Taking this innovative product step in this new consumer product category would be push the envelop in a growth market at the right time for Apple and get them back on track, post Steve Jobs.

The patent for such a device is already registered and was flagged in 2013 by Mac Rumours. In the article titled, ‘New Apple ‘iWatch‘ Patent Application Reveals Slap Bracelet with Wraparound Touch-Sensitive Display’. In this article the device screen is described as having a “touch-sensitive user interface” overlaid on the flexible display, in contrast to the physical buttons used on existing smart watches like Pebble. As shown by the illustrations from the patent application below.

So which companies have been behind the success of the FuelBand and which companies are likely to be in the mix with Apple if they are to take this leap forward?  For screen technology I’d predict 3M as they have the scale, innovation and track record to deliver this type of product. They have also already been showcasing their screen technology innovations in similar wearable concept products, as shown in the video below.

Technology Behind the Nike FuelBand

For the processing power of a new device, if we look inside a Nike FuelBand we can see the companies behind the existing Chip technology. These companies have the highest probability of being involved in an innovative leap forward with Apple, for wearable tech.

It is also worth highlighting that the Nike FuelBand came from a collaboration between Apple and Nike, for the Nike+ product range. The learning from this collaboration also creates a perfect bed for Apple to create the next generation technology in wearable tech. With the FuelBand having been the first step towards something greater.

A teardown of the Nike FuelBand gives a technical breakdown of the tech involved and the companies behind the chips. As Chipworks point out in their teardown, it is perhaps a first to see the Nike brand on the micro chip. A very Apple thing to do. These are the Chips in the device.

As shown below, ST Electronics and Nike collaborated on the FuelBand to create a Nike branded Chip. Lets see if Apple collaborate in a similar way with Apple branded wearable technology. Below is a list of the the chips in the FuelBand by component and manufacturer. 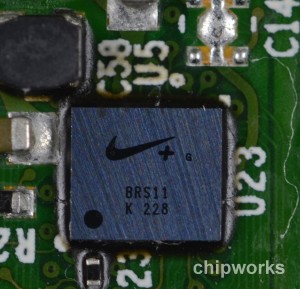 The STMicroelectronic Ultra Low Power MCU with eFlash. Revealed that the medium density plus ultra-low-power STM32L15xxC incorporates the connectivity power of the universal serial bus (USB) with the high-performance ARM Cortex -M3 32-bit RISC core operating at a 32 MHz frequency, a memory protection unit (MPU), high-speed embedded memories (flash memory up to 256 Kbytes and RAM up to 32 Kbytes) and an extensive range of enhanced I/Os and peripherals connected to two APB buses.

ARM, who’s core is already in the Nike FuelBand, is also another company that is crucial in wearable smart devices as they have been a supplier to Apple for years. The reason Intel isn’t in the mix is because ARM’s business model was focused on mobile devices years ahead of Intel who were busy making Chips for PC desktop manufacturers, which is an industry in decline. ARM have the intellectual IP to make wearable devices a reality when paired with Chips from Texas Instruments and ST Electronics & display technology from 3M.

Fast paced developments in the tech industry of semiconductor manufacturing, image processing and connectivity are creating a new breed of devices. Now have the benefit of components with increasing power, connectivity and reduced power consumption specifications.  These jumps in technology give Apple the opportunity to take the lead in a very exciting market. Lets see what happens during the rest of the year as it wasn’t announced at the Worldwide Developers Conference (WWDC), in June 2014 which is the main annual event where Apple gives the press and developers a peek at its latest projects.

One thing is for sure, it won’t be long before Samsung manages to extend their existing product range and bring to market the wearable technology visualised by 3M in the video above.